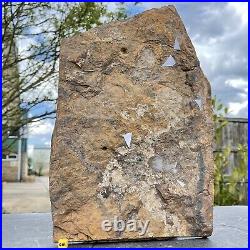 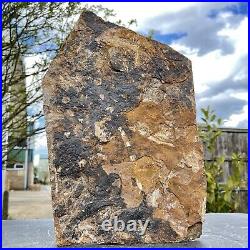 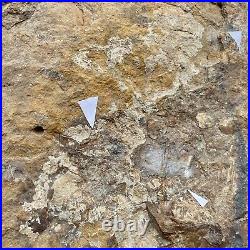 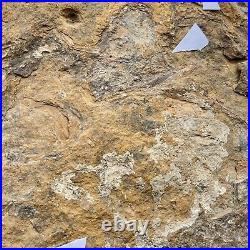 All of our Fossils are 100% Genuine Specimens & come with a Certificate of Authenticity. Please note: Some Fossils maybe propped up for photo purposes Name: Ginkgo adiantoids. Specimen: Leaf Age: Palaeocene. Location: Sentinel Butte Formation, N. Size: 380 x 243 x 33mm (14.96 x 9.57 x 1.3 inches). Ginkgo tree fossil remains are known as living fossils, this means that the fossil specimens are visually indistinguishable from species still present today. Plants were just as important millions of years ago as they are today, if not more so, as these were the organisms that gave our planet life, and helped sustain it! The first oxygen creating organism was an algae, which singularly spread across our planet & slowly oxygenised the air. Plants were soon to evolve from this algae & helped flourish the land, creating a liveable planet for future animals to roam, & provide a powerful food source for those animals to graze upon. Without plants the earth may have been an extremely different place to what we know today, & their fossil remains have helped us piece together one of the most important factors of our existence. ACTUAL AS SEEN: The image shows the EXACT specimen you will receive. The specimen has been carefully hand selected and photographed. Measurements are as accurate as possible, though be aware measuring precise dimensions can be difficult from irregular shaped items. Whilst we portray colours as close to life-like as we can, colours will vary if taken in sunlight, indoors, from monitor to monitor and device to device. What is a fossil? The word Fossil used to be defined as’something dug up’. Now-a-days it generally means’The remains or trace evidence of prehistoric life’. The study of fossils is called palaeontology; someone who collects and studies them is called a palaeontologists. Fossils can be as tiny as a grain of pollen or a seed for e. Or as huge as a limb bone from a giant dinosaur. For animal or plant remains to have become’fossilised’, they must go through a certain process that preserves them for up to millions of years after they have died. Usually it is only the hard parts of plants and animals that survive this long process. The most common method of how fossils formed is once an animal or plant dies, it falls to the ground, and is covered by sediment. This is often sediments brought from water. In the diagram above, the ammonite died in a river, and sediments over time covered the ammonite (shown in the second diagram). Finally after hundreds of thousands, or millions of years, the land is eroded and the fossil can be seen. Of the vast amount of prehistoric life that died, it is only a tiny amount that has survived the fossilisation process. The conditions when the majority of life died were just not right at that time, to preserve them. Most fossils are found in sedimentary rocks which were formed from the sediments of rivers, lakes and seas. The majority of the animal and plant fossils we find today, had originally died near these areas, got broken up and deposited on the beds of the rivers, lakes and seas. The sediments covered them and over time some of the layers grew so thick that many of them got crushed. The sediments compacted and over time and turned to rock. The rocks shifted, moved and became exposed to the elements. This process can take up to several hundred million years. Now as the rocks erode or are quarried for e. The fossils become exposed and can be collected. The Best conditions for Fossilisation. The quick burial of animal remains in moist sediments. This prevents scavengers from eating and bacteria from decaying them. The quick burial in volcanic ash. Many dinosaur bones in the American west have been found buried in volcanic ash. The presence of hard body or plant parts. Teeth, bones, shell and wood for e. Ground water that is heavily mineralised. Sediments that are very fine make a better burial than coarser gravels. Calm conditions, so that remains are not broken up (by wave or currant action for example). This item is in the category “Collectables\Rocks, Fossils & Minerals\Fossils\Plants”. The seller is “ukge-silvergeo” and is located in this country: GB. This item can be shipped worldwide.