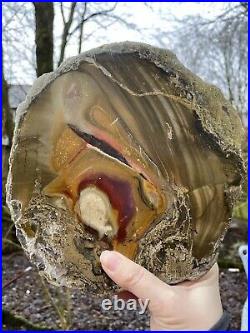 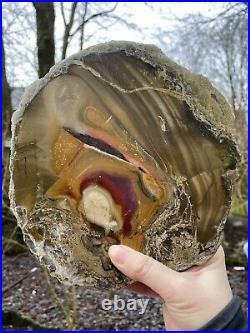 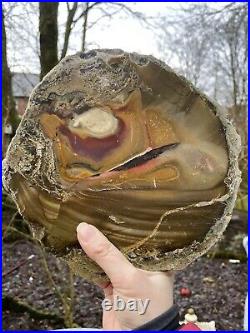 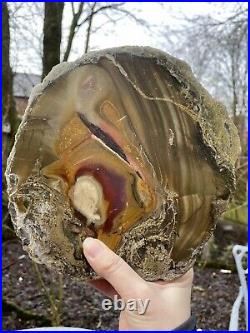 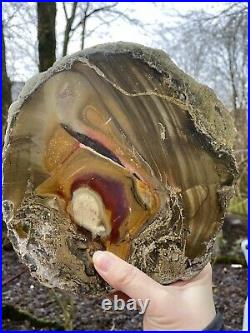 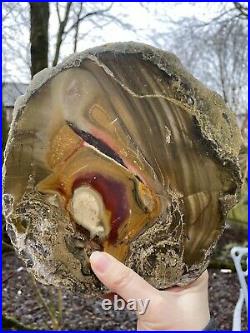 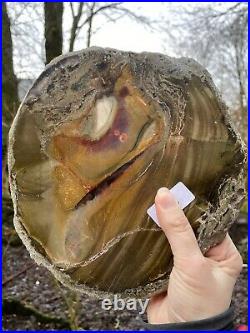 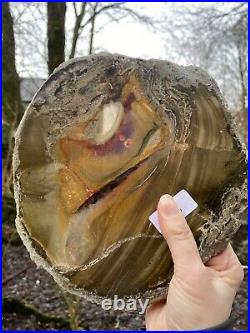 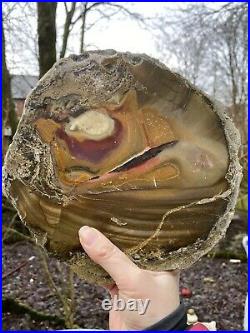 Im thrilled to be able to offer these large slices of opalised fossilised/petrified wood from Garut Indonesia. So many colours run through these specimens from browns, greens, yellows, red with opalised and moss like details within. They are extremely rare and polished on both sides. Weighing 1087g and measuring 208:208:10mm. Healing Stone for the Base Chakra : Grounding / Ancient Wisdom / Serenity. Petrified wood is a power house healer for me. It contains ancient wisdom and the healing power of trees. A calming stone, it helps you leave behind that that no longer serves you and achieve serenity. A protective and grounding stone. Petrified wood (from the Greek root petro meaning “rock” or “stone”; literally “wood turned into stone”) is the name given to a special type of fossilized remains of terrestrial vegetation. It is the result of a tree having turned completely into stone by the process of permineralization. All the organic materials have been replaced with minerals (most often a silicate, such as quartz), while retaining the original structure of the wood. Unlike other types of fossils which are typically impressions or compressions, petrified wood is a three dimensional representation of the original organic material. The petrifaction process occurs underground, when wood becomes buried under sediment and is initially preserved due to a lack of oxygen which inhibits aerobic decomposition. Mineral-laden water flowing through the sediment deposits minerals in the plant’s cells and as the plant’s lignin and cellulose decay, a stone mould forms in its place. In general, wood takes fewer than 100 years to petrify. The organic matter needs to become petrified before it decomposes completely. A forest where the wood has petrified becomes known as a petrified forest. Elements such as manganese, iron and copper in the water/mud during the petrifaction process give petrified wood a variety of color ranges. Pure quartz crystals are colorless, but when contaminants are added to the process the crystals take on a yellow, red, or other tint. Following is a list of contaminating elements and related color hues. Iron oxides – red, brown, and yellow. Manganese oxides – black/yellow. Petrified wood can preserve the original structure of the wood in all its detail, down to the microscopic level. Structures such as tree rings and the various tissues are often observed features. Petrified wood has a Mohs hardness of 7, the same as quartz crystal. Petrified wood is the provincial stone of Alberta and also the state gem of Washington. Argentina – The Petrified Forest National Monument in Chubut Province in the Argentine Patagonia has many trees that measure more than 3 m (10 ft) in diameter and 30 m (100 ft) long. Australia – Has deposits of petrified and opalised wood. Chinchilla, Queensland is famous for its’Chinchilla Red’. Belgium – Geosite Goudberg near Hoegaarden. Brazil – In the geopark of Paleorrota, there is a vast area with petrified trees. Canada – In the badlands of southern Alberta; petrified wood is the provincial stone of Alberta. Axel Heiberg Island in Nunavut has a large petrified forest. China – in the Junggar Basin of Xinjiang, northwest China government has issued a crackdown on collecting of this material, but large slabs and even large meeting tables have been made out of this colorful replaced wood. Czech Republic, Nová Paka – The most famous locality on Permian-Carboniferous rocks in the Czech Republic. Germany – The museum of natural history in Chemnitz has a collection of petrified trees found in the town in 1737. Ecuador – Puyango Petrified Forest is one of the largest collections of petrified woods in the world. Egypt Petrified Forest in Cairo-Suez road, declared a national protectorate by the minstery of environment, also in the area of New Cairo at the Extension of Nasr city, El Qattamiyya, near El Maadi district, Al Farafra oasis, Al Fayoum depression and actually the entire western desert. Greece – Petrified Forest of Lesvos, at the western tip of the island of Lesbos, is possibly the largest of the petrified forests, covering an area of over 150 km² and declared a National Monument in 1985. Large, upright trunks complete with root systems can be found, as well as trunks up to 22 m in length. India is a geological site famous for its petrified woods Thiruvakkarai Village in Chennai, Tamil Nadu. The site is protected by the Geological Survey of India. Petrified woods cover a large area in this site. Libya – Great Sand Sea – Hundreds of square miles of petrified trunks, branches and other debris mixed with Stone Age artifacts. Namibia – Petrified forest of Damaraland. New Zealand – Curio Bay on the Catlins coast contains many petrified wood examples. Ukraine – Petrified araucaria trunks near Druzhkivka. United Kingdom – many examples of petrified submerged forests can be found at low tide around the coast of England and Wales. United States – Some of the better known petrified wood sites include. Petrified Wood Park in Lemmon, South Dakota. Ginkgo/Wanapum State Park in Washington State. Grotto of the Redemption, a private park in Iowa. Petrified Forest National Park in Arizona. Petrified Forest (California) in California. Mississippi Petrified Forest in Flora, Mississippi. Florissant Fossil Beds National Monument near Florissant, Colorado. The item “Large Slice Opalised Fossilised Petrified Wood 9 / Serenity Grounding Wisdom” is in sale since Tuesday, February 16, 2021. This item is in the category “Collectables\Rocks, Fossils & Minerals\Fossils\Plants”. The seller is “prettylittlehealingcrystals” and is located in Chorley. This item can be shipped to North, South, or Latin America, all countries in Europe, all countries in continental Asia, Australia.